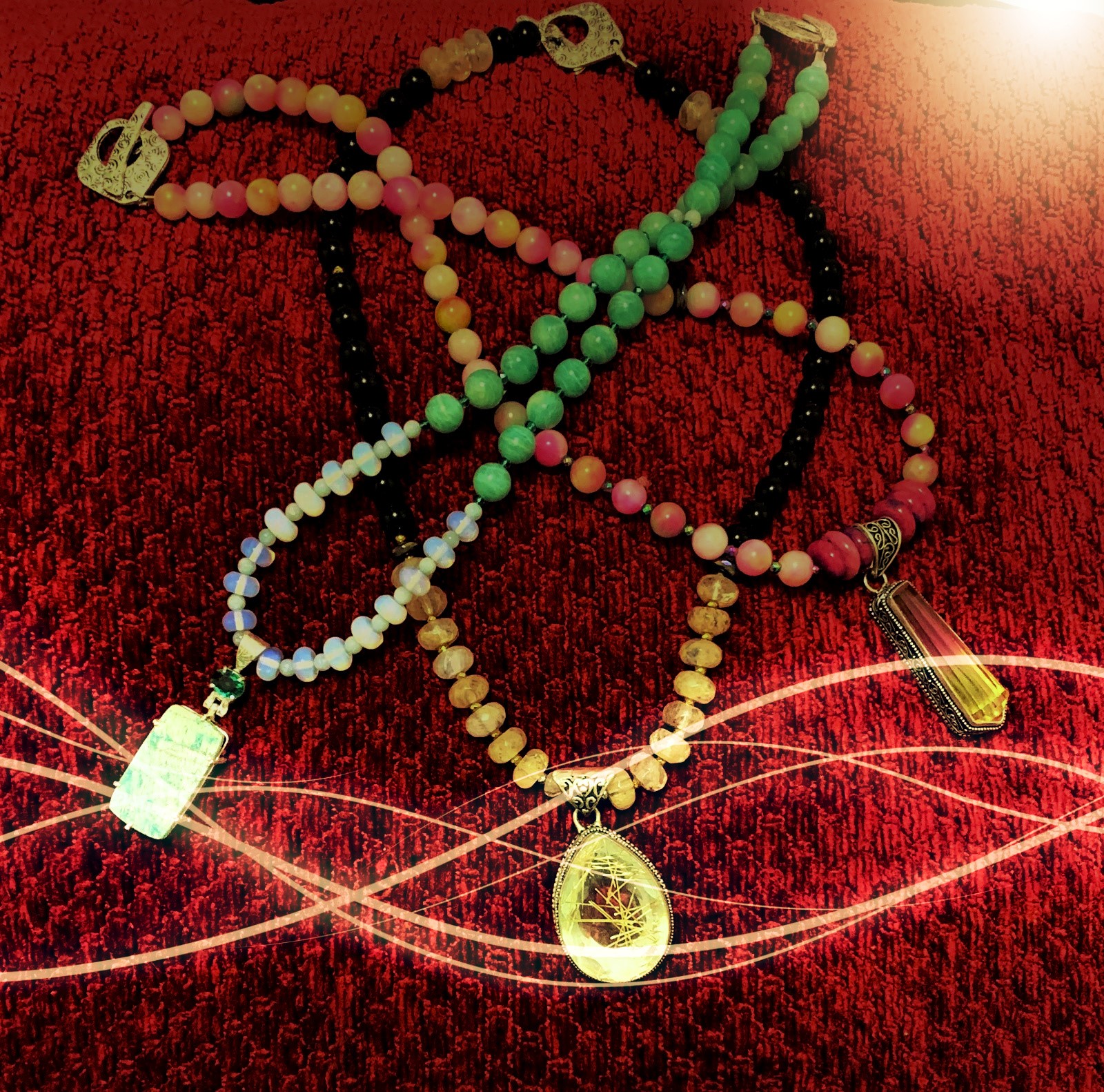 I have a wonderful friend, Sanda Gane, who lives on the Big Island of Hawaii. She creates the most beautiful and magical pieces of jewelry. I didn’t realize just how magical these necklaces and earrings were until this weekend at the Rasani Fair here in Albany Oregon.

I personally own several of Sanda’s creations. I have been drawn to the necklaces from the first moment I saw them at a roadside market in Naalehu. These pieces of jewelry spoke to me so much that I asked Sanda to make some necklaces that I could bring back to Oregon and sell at my booth during the Rasani Fair.

Opening day of the Rasani Fair was busy and many people were attracted to the necklaces. As they looked at them, I explained they carried the Aloha energy along with the properties of the stones. And of course, Sanda’s amazing energy blesses each piece also. This all felt so right.

While placing the necklaces on my table Sunday morning I heard Lemuria softly whispered through my mind. This sweet whisper was the door opening to the deeper understanding of the energy each necklace carries.

The Hawaiian Islands are known to be above the lands of Lemuria. My Group has spoken to me many times and explained that Lemuria was much larger than many believe it to have been. Lemuria included the West Coast and far into Colorado. For that matter every time my Group speaks of Lemuria and the land it encompasses, they say The Colorados.

What was shown to me throughout the day on Sunday was the sacred temples of Lemuria that sit below the Hawaiian Islands. I was seeing beautiful silver energy coming from the temples entering the stones and materials used in making the necklaces. I could see Sanda as she concentrated in assembling a necklace or pair of earrings unaware of the guidance that was coming to her as she worked. Each stone chosen and laid in the pattern that was precise in its necessity to carry the energy in such a way that it would be most beneficial to the wearer.

I was spell bound by the images and messages being sent into my mind. Whenever there was a moment that was quiet at my booth more information flowed.

Images continued to cascade through my mind. I was shown the necklaces vibrating with energy as I brought them home. There was a brilliant bridge of silver light connecting the necklaces with Lemuria. This light kept arcing over the ocean in the most amazing way. Sparkling and in movement. Almost electrical.

That wasn’t all. I was shown people being called to a specific necklace. There were people in many locations along the West Coast wearing these necklaces and as they did the arcing energy reconnected them to the Lands of Lemuria. I could see how the energy was opening their inner knowledge and wisdom. Re-awakening them to an earlier life in a place of harmony and perfection. Bringing to the surface of their awareness the re-membering of times in which the Earth was brilliant in color, much more brilliant than now. Where all life easily communicated with each other.

What a beautiful gift for me to experience. What is even better, is being able to put it into words and share what I was being shown with others. If you are drawn to Sanda’s work, know there is a purpose other than her necklaces and earrings being spectacular. Let the energy wake you to more of who you are.

Belknap Hotsprings Retreat cancelled due to Covid. We are looking forward to 2021 and hosting the retreat then, continue to check back for information.
Can't wait to get us all together!