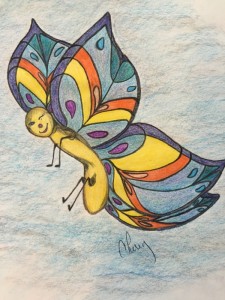 I was sitting on my couch somewhat somber. My grandmother had passed away a few hours earlier in the day. She was the grouchiest old woman I have ever known and I loved her dearly. As I sat there remembering her I was compelled to pick up my colored pencils and this little character drew himself.

He was not the type of picture I would normally draw. I was fascinated with the way he was coming to life. Bright, cheerful and happy. Filled with color. When he was finished I was smiling.

Then the light bulb went off in my head. My grouchy old grandmother loved these types of little characters. While I was growing up she would cut this type of picture out of magazines and send them to me along with her letters. During the times she lived with us, if I was having a glum day sooner or later she would walk over to show me some little fun little character or cute writing.  I knew she had sent this little guy to me to say “Hi” and to let me know she was alright.

After I realized this another type of drawing began presenting itself. These drawings were of clowns. Again, something I had not drawn before. They filled my head urging me to put them on paper. I had no idea why this was happening and did not understand for many years.

What was the significance of the clowns? My grandfather who had passed before I was born was a clown on Vaudeville and then on radio. He was letting me know that he and my grandmother were together. That he had met her as she had passed. 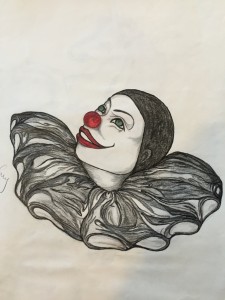 Those that we love may leave our physical world yet, they are never truly gone. Oh, my grandmother has visited many times since that cute little butterfly came to me. Maybe one day I will tell you about the Thanksgiving yams. Have a wonderful day!